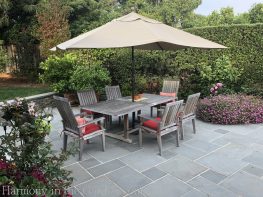 Everyone loves a good makeover, right?

Over the next several months I have lots of gardens to talk about.  Some belong to my clients, others are near my new home in Granite Bay, some from around the country, and a few surprises I’ll share with you later.

So as we enter into another cold and wintery weekend, I thought you might like to nestle in, make yourself a cup of tea, and gather a little inspiration from one of my favorite recent before-and-afters. 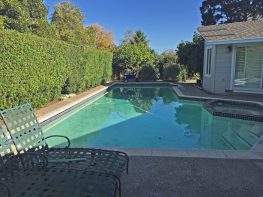 This is the garden of one of my best friends and is one that I’ve wanted to get my hands on for years.

Sure, we’ve had some amazing memories with various birthday and girl scout pool parties, but once the kids flew the coop, the pool sat there year after year with very little use.

After years of going back and forth regarding keeping the pool or removing it, a decision was made – remove the pool!

Removing the pool is never an easy decision: there are emotional hurdles to overcome (all those fun family memories!), financial hurdles (it’s pretty pricey), and inconvenience hurdles (it’s incredibly invasive, noisy, and messy.)

But in the end, it’s so worth the headaches.

Here’s what to expect if you’re thinking of taking out your pool – lots of loud equipment trampling your existing garden, digging for days and days, and a mess like you’ve never seen.  But trust me – it’ll end soon enough! 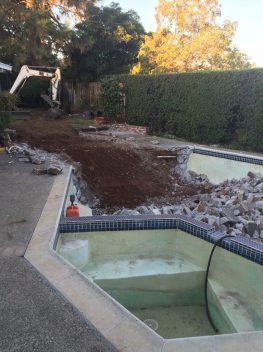 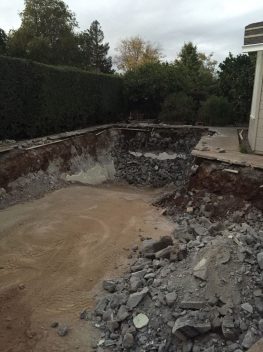 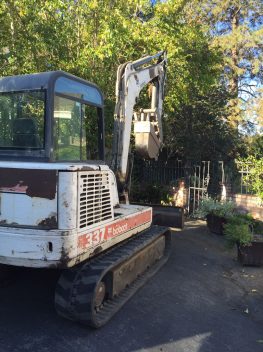 Since the family was pretty nervous about the decision to remove the pool, it was critical that I design their new garden with elements that would help create a whole new batch of family memories.

We did this by including something for everyone:

We gave this space a facelift by creating a spacious Connecticut bluestone dining area to accommodate lots of impromptu entertaining.

Surrounding the new patio is a low retaining wall which will double as extra seating when needed.

We made sure to leave lots of space for their daughter’s seasonal containers (a budding passion of hers, which of course thrills me!) 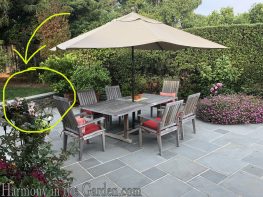 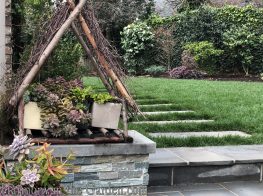 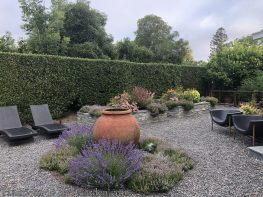 Bordering the patio is the focal point of the garden – a stunning fountain converted from a jar from Eye of the Day Design Center.

Surrounding the fountain is a mix of lemon thyme, dwarf lavender, and blue fescue grass.  Instead of lawn or bark chips as a groundcover, we decided to use small, smooth La Paz pebbles, adding a wonderful feel and sound when walked on.

It’s a relatively simple process to convert almost any type of container into a fountain.  Click here to see another example, as well as find information on how to do this.

Near the fountain are lounges for the sunbathers in the family, as well as a pair of heated Galanter & Jones chairs.  Yes, heated!

I can’t emphasize enough how incredibly comfy and cozy these chairs are when there’s a chill in the air – my favorite chairs ever.

Each year, her husband loves growing tomatoes from seed, so he wanted a space where he can continue to grow them, along with other crops of beans, peppers, and even corn.

The garden is small, but we were able to create a space at the very end that would have enough sun for his vegetable beds, complete with a see-through fence to keep out their rambunctious puppy. 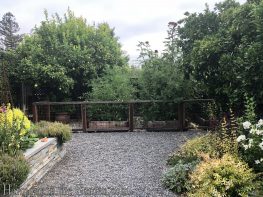 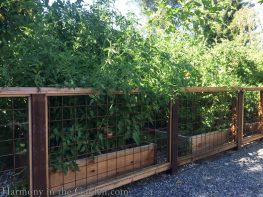 Next to the fenced vegetable garden are two stacked-stone raised beds designated for cutting flowers and herbs.

These raised beds not only provide plenty of bouquets for the house but also protect the plants from marauding puppies! 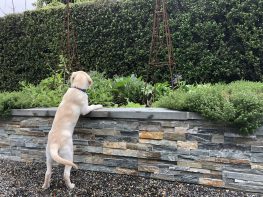 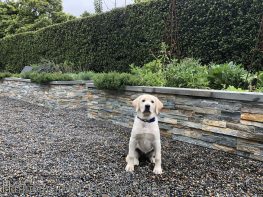 Over the next few months I’ll be posting more before-and-afters, so stay tuned for lots of inspiration!

Oh, and for those of you attending the Northwest Flower and Garden Show next month, I hope to see you there!    I’ll be speaking on Feb. 20th and 21st, as well as competing in a fun, live event called ‘Container Wars’! 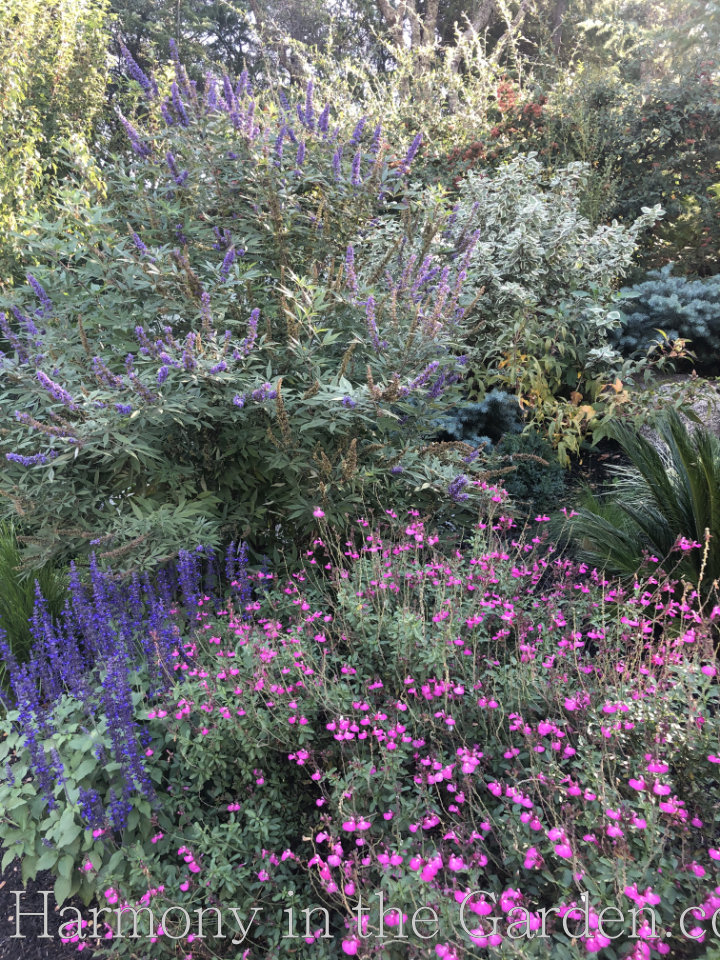